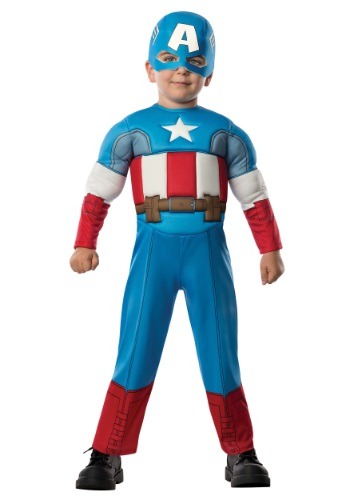 Our world is just bursting with some of the most amazing heroes that any group of people could possibly imagine.  We’ve got dozens of adventuring teams that are ready to step in the way of danger to make sure that we’re all safe, but the Avengers probably are among the ultimate of our guardians.  (Well, other than the Guardians, we suppose.)  But, between the Hulk’s indominatable strength and Black Widow’s crafty talents, Hawkeye’s dead-shot aim, the genius (if a bit full of himself) inventor of the power armor, and let’s not dare forget the literal god of thunder, Thor, the Avengers are basically ready to conquer anything in their way.  Lead by the mighty Captain America, Steve Rogers, himself, there’s about nothing that they can’t tackle.

But, every hero has his start and Captain America didn’t begin as a beast of super soldier skill.  He started out a kind and good hearted guy just like the rest of us.  In fact, almost exactly like that little kiddo of yours!  One never knows where the future may lead, so why not the idea of your tyke standing up and becoming the world’s next heroic protector!?

Well, if you’ve got the same goals, it is important to start on your little one’s training sooner than later.  We probably don’t need to leap right into the super soldier training regime, but it sure won’t help to get them used to the costume.  Try out this officially licensed Toddler Deluxe Captain America Costume and watch as your kiddo goes from being an adorable tyke and turns into the amazing Captain Mini America!  The jumpsuit has the all over printing that matches perfectly with Cap’s own look.  Pick up the iconic shield and we’ll all be on our way to victory!