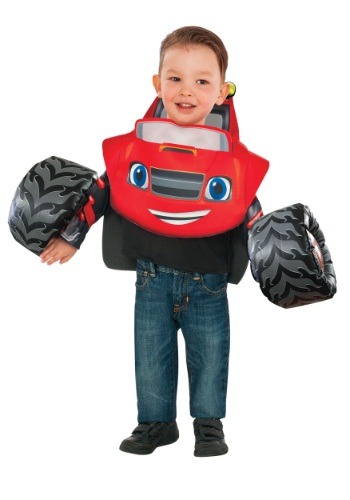 So, that costume party is quickly approaching and you need to figure out what costume your child is going to wear. You decide to ask him what he wants to be and he exuberantly shouts, “Monster truck!” (He’s your kid, alright.)

What are you supposed to do with that? You were probably expecting him to name his favorite superhero, or maybe some kind of animal. You could have handled either of those with ease, but monster truck? Where are you supposed to find something like that? They don’t make a costume for that, do they? Well, we’re here to let you know that they do and it’s absolutely glorious.

This child Blaze and the Monster Machines costume is a monster truck costume based on the character from the popular Nick Jr. television series. The costume comes with a bright red foam overshirt, which has the printed image of Blaze’s smiling face on the front. It also comes with an undershirt that has plenty of printed, car-like details on it. Of course, both of those pieces pale in comparison to the arm covers. Each arm cover fits with a Hook and Loop fastener strap and inflates to look just like a monster truck tire! Once your child has them on, he’ll be ready to VROOM! VROOM! all through the house.

It’s the perfect costume for young kids who love Blaze and the Monster Machines, or for any kid who has an extreme desire to be a big monster truck for their next costume party.