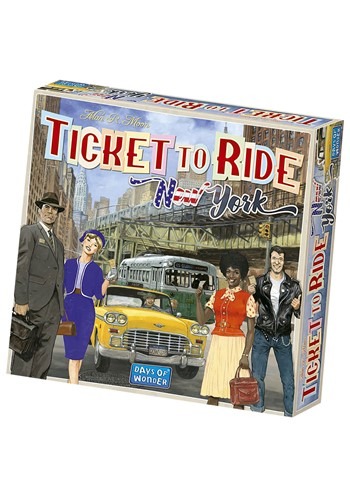 You've traveled all across the United States. Maybe you've even gone international. But, in all of your time plotting tactical ways to control the railways and infrastructure of the world, have you ever considered taking New York!?

It's time to turn the epic game of Ticket to Ride into the 15-minute mayhem of trying to flag down a taxicab on the busy streets of New York City. Claim your paths and command the Big Apple with your ultimate taxi corporation.

As we said, Ticket to Ride: New York lets you play the award-winning game Ticket to Ride in a much faster session by zooming down to the streets of New York. Each round, you'll choose either two random transportation cards, two of the face-up colors, or the rare Wild Taxi. Play groups of colors to claim taxi routes and earn points. Once one of the players manages to get down to only a couple cabs, the last round of the game begins and you race to have the highest quantity or most valuable routes to win the game! 15 minutes for 2-4 players. Who can beat that?

Time to see if you've got the stuff to conquer the Big Apple—and the traffic! Get together for this quick dose of rush hour and earn your victory once again.