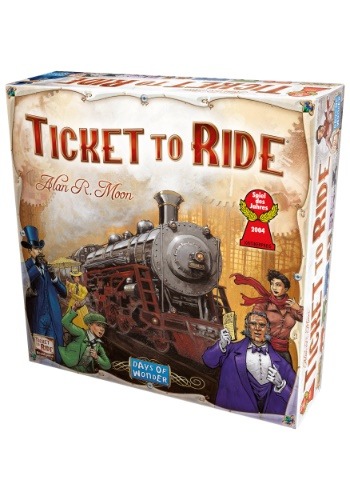 Ticket to Ride Board Game by Asmodee

Your reputation is at stake. You only have a few turns to plot out the best train route. New York to Los Angeles? Winnipeg to House? Seattle to Miami? You need to cover as much ground as possible to win the bragging rights of being the master of traveling on the rails, but you only have so much time to do it in!

That's what the game Ticket to Ride is all about! Based on the locomotive craze back in the late 1800s and early 1900s, it's your job to beat your opponents in a race across North America. You'll be collecting cards, matching them up, and using them to plot train routes to some of the most famous cities in the U.S. You also need to watch out for other players! They might try to steal the route that you've been planning on using, so don't wait too long to grab the best spots.

This board game is a 2 to 5 player game that comes with a deck of train cards, a deck of ticket cards, train-shaped game pieces and a score marker for each player. The game is quite simple to pick up, but mastering it involves learning some complex strategies, making it a great game for the whole family. Players collect points by completing long tripes across the U.S., or by plotting routes on some of the coveted 6-spaces routes!

The German-style game has won plenty of awards, so it's sure to be a game night favorite. And you'll finally be able to dub one lucky player the master of train travel!