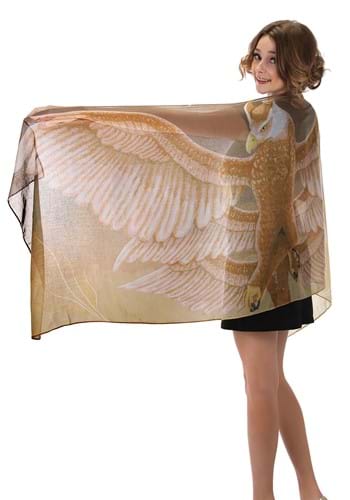 There are several reasons North American thunderbirds don't make good pets. You were probably inspired to keep one after observing its relative, the phoenix, do alright as human companions. But relative or not, these magical creatures are best left wild. The first reason, thunderbirds are a protected species under the declaration of MACUSA. Second, the Arizona natives are not near as small as their phoenix cousins. Three sets of mighty wings simply can't be supported on a slight frame, and this sturdy figure comes equipped with talons and a beak multiple times larger than even a hippogriff. No. As alluring as the prospect is, it would be better to bring home the next best thing.

Living creatures aside, we believe this exclusive Thunderbird Lightweight Wing Scarf is the next best thing to owning the fantastic beast. A high-detailed sepia-toned illustration of a Thunderbird is printed to fill the scarf's 75" x 25.5" dimensions. Draped over your shoulders, you'll feel you've taken on the stunning creature's powerful wingspan despite its more manageable size. However, tied, wrapped, or tucked into an ensemble, the officially licensed scarf ensures your favorite Wizarding World wildlife is along for the adventure, wherever the wind takes you!