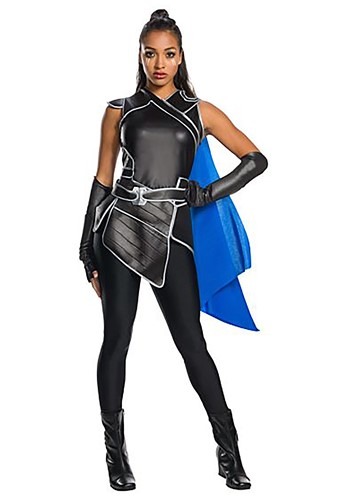 Here's the thing: As a long-time resident of Sakaar, you've seen a lot of weird stuff. Like, a lot. You serve the Grandmaster after all, and he's a few tacos short of a combo platter, if you know what we mean. So when a crazy guy with long hair shows up claiming to be the god of thunder and demanding to be released, you do what you always do: Deliver him to your boss as a gladiator and use the prize money for a good drink. But somehow you find yourself relating to the outcast guy and his big green friend, and you think that home might be calling you for the first time in years. Plus, those guys need your help to defeat Hela. Lucky for them that you're the last of an elite fighting force! Better bring some drinks, just in case.

You'll be the most feared warrior in the galaxy in this officially licensed Deluxe Thor Valkyrie Women's Costume! The pullover sleeveless stretchy tunic comes with attached foam armor to keep you safe against Hela's pointy weapons. The attached blue cape swishes dramatically behind you as you fight. The foam gauntlets guard your arms, while the foam belt provides an ideal spot to stash your (lightweight) weapons when not un use.

That's What Heroes Do

No need to stick around crazy Sakaar any longer. You can fight alongside your people and help guide them into a new era after a huge fire demon destroys Asgard. You might not have seen yourself as a hero, but that's what your friends will always remember you as.