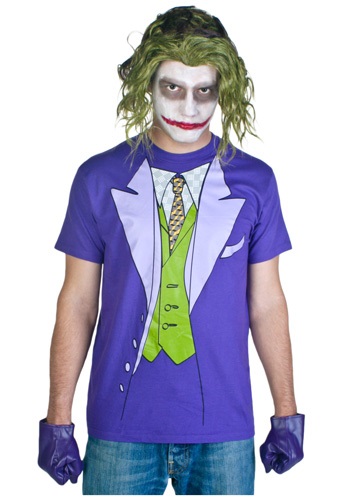 "I believe whatever doesn't kill you simply makes you…stranger."

Look, we get it - sometimes it’s hard to be Gotham’s agent of chaos when you’ve got a lot of stuff on your to-do list. After all, just because you’re the Joker doesn’t mean you don’t have errands to run!

So when you’ve got a packed schedule but you also know that villains gotta vill, make it a little easier on yourself with this The Joker Men's Costume T-Shirt!

Made out of comfy pre-shrunk cotton (100 percent for the record) this purple tee will move with you while you’re running to the post office and then jumping on over to Gotham’s water supply to poison it with laughing gas. It’s also got a look that says, “hey, I’m casual” while you’re stopping into the store for some milk, eggs, and butter (what, you think we don’t know that villains love having some dairy in their diet?) while still offering the signature look your known for with the Joker's suit jacket lapels and green necktie are printed on the front. After all, you never know when you’re going to run into your old buddy Batty on the street, and knowing your life, it always happens when you’re the least prepared for it! Oh, and did we mention that The Joker Men's Costume T-Shirt is also officially licensed by DC Comics? That’s right, friend…you might be the life of the (insane) party, but in this tee, people will still know you’re serious about chaos and crime!