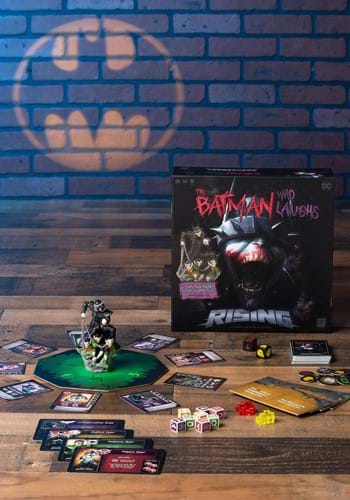 Rising- The Batman Who Laughs Board Game

Have the Last Laugh

Gotham is known for its rather unusual supervillains. But, when you get alternate dimensions involved, one can never be sure what craziness is about to ensue! Will it be Joker this time? How about a dark and sinister version of Bruce Wayne himself? Looks like the multiverse is pulling the biggest prank out there and sending you up against the Batman Who Laughs! It's time to call on your allies to take down this super threat!

Team up with your friends and family in a cooperative game that brings your favorite characters and villains to life with this Rising: The Batman Who Laughs board game. In this game, you'll recruit your favorite characters from across the DC multiverse and combine their powers to fight against the Batman Who Laughs before he achieves his wicked goals. Players take turns rolling a pool of dice given to them by their characters and using unique abilities in order to defeat various minions and overcome obstacles. Perhaps a tech-savvy Batman combines with Robin's quick agility! (And maybe it's time for Catwoman to commit to her heroic side.) The tension is always on as the Batman Who Laughs takes his turn and tries to undo all of your efforts. It'll take teamwork but we know that you can save the day!

The Joke's on Batman

It is always a little surprising to find yourself face to face with a 'you' from an alternate reality. Even more when Batman meets his more Jokery counterpart. Gather up your favorite Gotham heroes and take down the Batman-Who-Laughs before he makes a joke of everyone in this DC Rising board game.