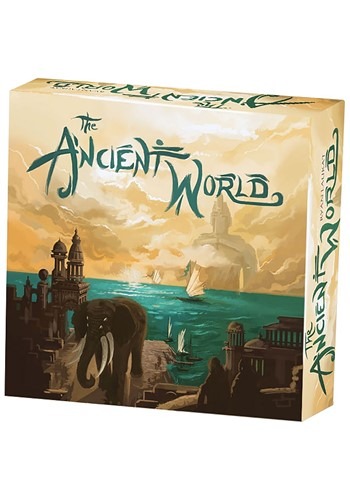 Trying to make your way in an ancient world is already tough. You lack the conviences of the modern world and have to work together with the resources you have in a relatively limited amount of time. That's in a normal ancient world. But, what happens when supernatural entities of truly enormous size are also tromping around, looking for their next delicious snack and finding that they've always got some chunk of a city stuck under their feet? Well, then it is time for the tribes to unite and take down the threat once and for all!

It's time for 2-4 players to try to save their world in 90 minutes or less in the Ancient World. In this worker placement game, you will take six rounds to place tribal workers throughout the land and gather up their supplies. Use those resources to construct villages, cities, and try to create the largest empire that the ancient world has ever seen. Of course, there is one little problem: the titans. Massive brutes threaten your future and you must train some of your tribe to take up arms and challenge the titan to combat. With enough skill you can take them down... but at what cost!? Flip the titan to see how much damage it does to your constructions. Too much and you may spend all your time repairing while your opponents complete the Great Empire!

When you're trying to create a lasting empire, it is either the titans or you! Manage your resources in this beautifully rendered game and prove that civilization can win out over the terrifying forces of the supernatural world.