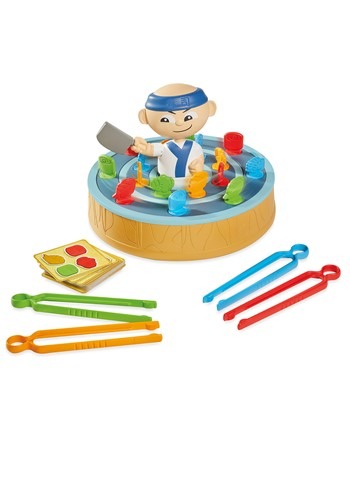 Kiddos love to be picky about what they eat. Maybe they only want food with a particular color. Perhaps they'll only eat food that is shaped in a certain way. This goes way beyond merely cutting the crust off bread, after all!

But, eventually, all tykes need to learn to try a few new things. They might surprise themselves! All they need is to see all the possible options in front of them. Of course, if you're a little bit tricky, you might get them to really want to try something new!

It's time for the Sushi Scramble! This game plays up to four folks and has them fervently trying to nab some food that a certain chef would prefer to chop away. (No wonder they want to try so hard!) Each player receives a plate card in front of them and takes a pair of chopstick tongs. When the turntable starts, players need to grab the colorful food tokens and place them on their plate. Finish making your meal first and you win! But, that chef is going to be a problem. They've gotta act quick or the chef will chop food over, so players can no longer pick them up! (Rather the opposite of what a chef is supposed to do, right!?)

Kiddos might give you the stinkeye for suggesting sushi for dinner. Once this chef tries to tell them they're not gonna win, you'll see a new interest light in their eyes, though! Scramble up some delicious meals in the Sushi Scramble!