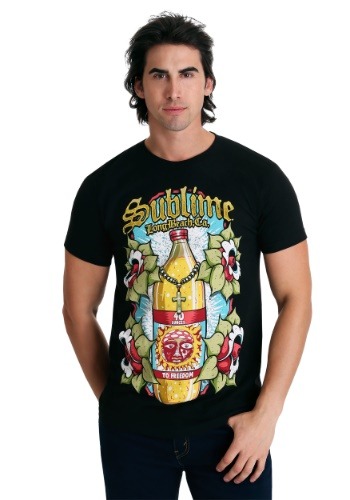 In 1992, Sublime released their debut album "40oz to Freedom". The sound of this album blended various forms of Jamaican music, reggae, hip-hop, and ska. This album still remains one of the most famous albums from the '90s. Sublime represented skaters, burnouts, surfers, and brought together all types of different social groups to enjoy their music. This album was recorded secretly in the California State University studio, with band members hiding from security guards and recording all night into the early morning. The only chance to feel good if you feel bad is to wear this Sublime 40 Oz bottle t-shirt.

Sublime not only represented an iconic era of music but artwork. This pre-shrunk cotton black t-shirt is adorned with a 40 oz bottle surrounded by lotus flowers. On the 40 oz bottle, there is the Sublime sun logo. This sun is very detailed if you look closely. The head of the sun is composed of a mushroom, representing the drug scene that band members were immersed in. The skeleton of a fish is an eerie omen that life is short, and reminds fans of lead singer's Bradley Nowell's own death. While many who look at Sublime's album artwork may dream of a sunny, and laid-back California, the artwork also represents a deeper meaning. If you are a Sublime fan, you must own this Sublime T-Shirt 40 oz Bottle t-shirt.

LOVE IS WHAT YOU GOT

Besides love, this shirt is what you got, so don't start a riot. We don't practice Santeria, and we don't have a crystal ball, but we know you won't be going the wrong way with this Sublime T-Shirt 40 oz Bottle