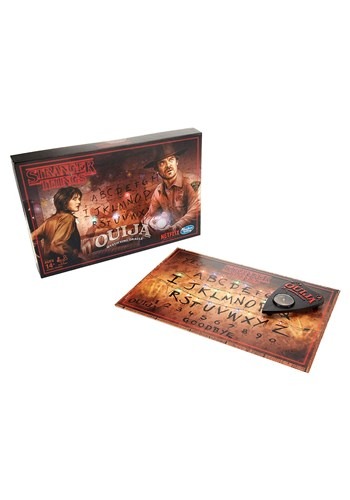 Something strange is happening in Hawkins, Indiana. Not everyone is seeing it, though we don't understand why. After all, strange lizard-like creatures are crawling around in dumpsters and that crop of pumpkins didn't go bad in one night for no reason. No, the people of Indiana seemed determined to stick with the ordinary.

While most of the residents prefer to ignore the stranger things that are happening, we think it would be pretty interesting to get in touch with what's new and fresh in the "Upside Down". Gather your Dungeons and Dragons crew in the basement to ask some of those burning questions. Why has the whole town forgotten about poor Barb? Why won't those cold vines leave poor Will alone? Also, who is funding the dishonorable Hawkins Lab, that's a ramshackle operation if we've ever seen one!

Now, we're not promising that you'll learn the plot of future seasons when you and your buddies are asking this board questions but you're sure to be amused. The planchette cursor is a sharp black with red lettering. The board is attractive with blackened corners and a warm interior with Joyce Byers's handy Christmas lights. It'll be a nice change from your typical dice rolling battles with the Demogorgon. Maybe you'll even get on the up and up with those evil vines because we're not going to stand for them taking down next year's pumpkin crop!