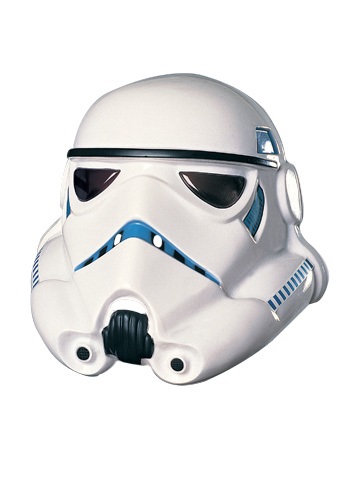 When we were first approached by the Empire to help work on the public image of the Stormtroopers, admittedly, we were a bit shocked.  Pretty literally, actually, since the Emperor didn’t like our initial hesitation and let loose with the whole Force Lightning routine.  We were pretty quickly compelled to work on something after that!  And, we quickly discovered that it all came down to a few foibles in the original helmet!  How can any trooper be expected to land perfect aim with helmets whose visors were painted black!?

Well, the Emperor was none too pleased with our initial explanation, insisting that black was the only color for Stormtrooper visors… a fact we agreed with.  But, with our new Stormtrooper PVC Mask, you and the rest of the Galactic Empire will no longer be guessing at what you’re firing upon thanks to the innovations of darkened plastic instead of jet black metal lenses!  So, we apologize to the Rebels… (Though, we have plenty of options for you guys, too!  Just don’t tell Palpatine!)

This is a half mask. This means it only covers the front part of your head.
Answer
Ask a Question
Reviews