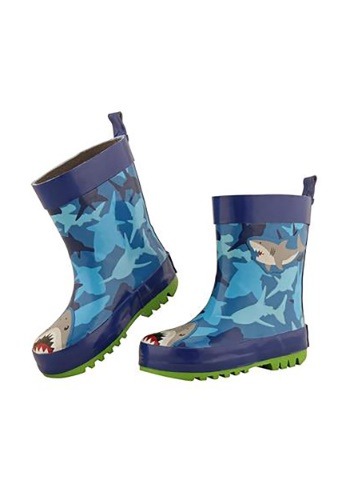 It's raining! It's pouring! We know your little guy isn't snoring! He is hyper and wants to play! Let him make some waves and jump in the puddles outside! After all, he isn't afraid of the rain or getting wet. You know who else isn't afraid?

Sharks! If sharks seem a bit scary to you, don't worry because there are also many cool things about sharks too! Sharks have an extra electric sense that allows them to detect heartbeats of other animals. Sharks also have no bones except in their jaws and spinal columns! Isn't that cool? Well, we have just the rainboots that will keep him fresh to depth. These Stephen Joseph Shark Child Rain Boots will allow your little guy to play outside and for you to turn off that dreaded "Baby shark doo doo doo" song.

He can make a splash while staying warm and dry with the natural rubber outer shell. You can remove the cotton/polyester insole whenever you want it to get some air. Blue sharks cover these rain boots, and on the toe is an image of a great white shark flashing his pearly whites. These Stephen Joseph Shark Child Rain Boots are JAWSOME!

Like the hammerhead, Mommy or Daddy shark will NAIL it when they purchase these Stephen Joseph Shark Child Rain Boots.