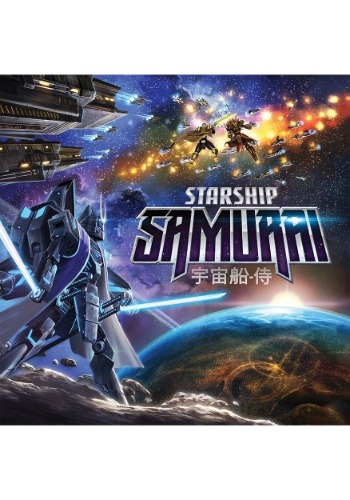 The Mech With the Most

Usually, giant mech stories involve a big and scary tyrant that is quickly dispatched with the mighty slash of the lone and legendary mech warrior that is brought together by the teamwork of a handful of quirky folks. Well, there are a few of those out there, by now, and it seems that each of the ancient clans of the Lotus Galaxy has one of their own! Let's just say that assuring victory for one is becoming much more difficult. It is time to end the civil war with a single victor!

Join 2-4 players for 60-90 minutes of simulated space combat with a truly anime flavor in Starship Samurai. This board and card game includes dozens of detailed figures to represent each player's fighter and carrier ships as well as the unique Samurai figures. The best part is that each player gets to draft two of these magnificent mechs! Through several rounds, each player will take a variety of four different actions to move their ships and samurai from their base to different planetary locations, gain money, draw combat cards, or gain allegiance with several of the lesser clans (or steal it from other players). At the end of each round, combat ensues between all ships and samurai at each location. Play cards to gain surprise advantages because the winner of each fight gains the benefits of that planet! The game ends when all planets have been claimed. Tally up victory points by seeing how much fame each player has gained from the lesser clans and additional bonuses from each planet the player has claimed.

Not only does Starship Samurai give you the chance to claim victory over your friends, but you can paint and design the intricate miniature figures of these space-faring mechs to your style. (We highly recommend a prismatic tone for the lion-maned warrior!)