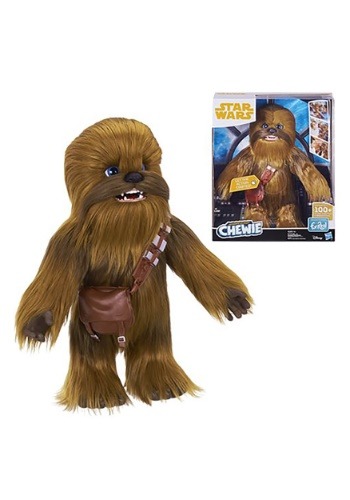 We all need a co-pilot in life. You know, someone who has your back when Jabba the Hutt tries to freeze you in carbonite. Someone who will spend hours trudging through the icy winds of Hoth to look for you. The kind of person who would rescue your behind from the Death Star when a mission goes horribly awry there. Perhaps, someone who is extra fluffy that gives some pretty epic hugs…

You know who we’re talking about! We’re talking about the one and only Chewbacca from the Star Wars. He’s done most of those things and more to help out his good pal, Han Solo. Now, with this Star Wars Ultimate Co-Pilot toy, you can bring the furry Wookiee with you everywhere.

This Star Wars Ultimate Co-Pilot Chewbacca toy is made by Hasbro and it isn’t your average Chewie doll. This furry little buddy stands nearly 16” tall and is covered in a layer of brown faux fur. The real treat with this figure is that he is fully interactive! That means you can call his name, talk to him, give him hugs, touch his tummy, or pat his head, and he’ll speak one of over 300 different Wookiee sounds. He also moves depending on how you interact with him, so it almost is like have your own Chewbacca to bring with you on your intergalactic adventures!

Strap Him in for Co-Pilot Duty

If you’re in need of the ultimate co-pilot, then you’re going to want this adorable and fully interactive Chewbacca toy! We won’t blame you if you strap him into the passenger seat of your car for a brand new adventure!