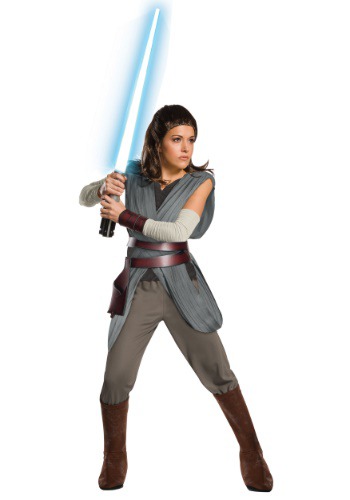 Well, adult life really didn’t turn out like you thought it would, did it?

You thought that you’d be going on wild adventures across the galaxy. You were going to fight against tyranny and you were going to learn some really sweet martial arts moves. By golly, your life was going to be like a Star Wars movie! Instead, it mostly becomes a whirlwind of responsibilities and obligations. But, fret no longer. It’s time to reclaim those dreams! It’s time to become a kick-butt, Force-wielding hero that saves the day.

This deluxe adult Rey costume is inspired by the outfit worn by Daisy Ridley in Star Wars: The Last Jedi. It helps you feel like the hero you’ve always wanted to be. It comes with the top, which has wraps attached to it to recreate the look of the outfit in the movie. It also comes with a pair of pants with attached boot covers to complete the look. Combine that with the arm warmers and the cuff, and you’ll be ready to start your journey to becoming like a Jedi!