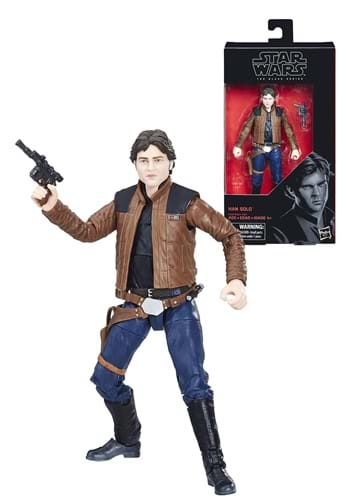 THE SMUGGLER WHO WOULD BE HERO

We spend a lot of time thinking about our favorite heroes.  Ever look at the adventures who literally helped to reshape the entire image of the galaxy and wonder what they were like before they became the big time hero that they did?
We're not talking running around in space-diapers, but those formative years are a pretty big deal!  Were they awkward teenagers?  How about trouble-makers that overcame their issues?  Or, in the case of Han Solo... maybe not so much.

Celebrate the new film by collecting your own young Solo with this Star Wars: Solo Black Series Han Solo 6" Collectible Action Figure.  You won't even need to deal with carbonite to have a permanent Solo of your own with this figure that shows the young smuggler still giving the same fierce look that he would be known for in the future.  Smuggler jacket?  Check!  Blaster?  Check!  Roguish good look?  You betcha!

THE HERO OF THE BLACK SERIES

Get your hands on the collectible of the year with this Han Solo Action Figure from the black collection of Solo: A Star Wars Story.  It won't be too long before he grows up and becomes the cynical reluctant hero and finds himself in trouble with Jabba.  Keep this young, idealistic Solo safe!