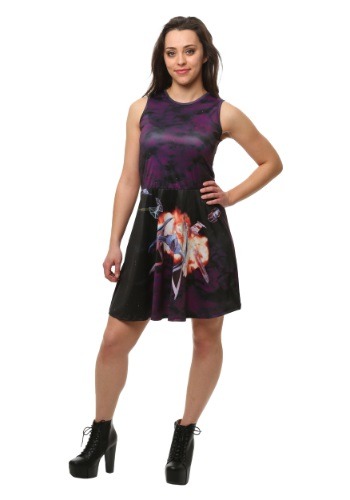 The space-battle scenes are probably one of the coolest parts of the Star Wars movies... and that's saying a lot. They're almost like ballet, in a way; so coordinated, exciting and musical... except with lots and lots of laser-blasts and explosions. Tons of explosions. Though a feast for the eyes, it might not be an obvious choice for a dress print, but that's why it's so perfect. A dogfight amongst the stars makes for a truly unique way for a Star Wars fan to show her appreciation for a story that happened "a long time ago, in a galaxy far, far away..." That's why we think you and this awesome Star Wars Sublimated Ship Scene Tank Skater Dress were made for each other!

There's simply no cooler way to celebrate your fandom than with this officially licensed garment, which features a TIE fighter blasting its way through an X-Wing. The eye-popping, shiny sublimated printing assures that these colors won't run, since the dyes are fully part of the fabric. Simply put, this is a Star Wars suit that will set you apart from the crowd, and make you look fantastic!