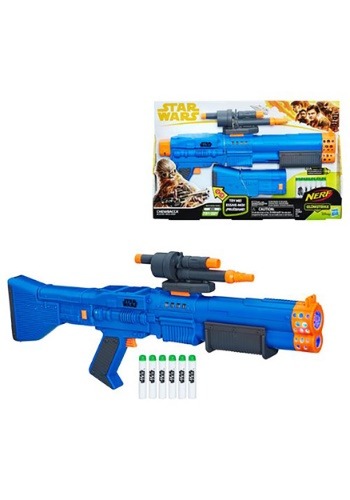 Chewbacca is a stand-up kind of guy. Or perhaps Wookiee? Just ask his best pal Han Solo! He'll tell you all about how Chewie has stood by his side during the worst of times. He's the type of friend who will fly your ship when you're busy fixing the hyperdrive. He'll toss bounty hunters around like ragdolls for you. He'd even charge headfirst into a squad of Stormtroopers with nothing but a blaster rifle if you asked him to. He's just a good friend. Do you strive to be a good friend like Chewbacca? Then you'd better have a blaster ready!

Well, grab this Chewbacca Nerf blaster and you can be like the number one Wookiee in the galaxy! This Star Wars Chewbacca Nerf Blaster comes from the movie Solo: A Star Wars Story. The blaster comes with 6 glow darts, which look like the real blaster bolts when fired in the dark. It has 2 barrels, which are both front loading style barrels. When you prime the gun, an LED light inside the chamber "charges" the darts, ensuring that they glow in the dark.

Not only does this blaster make for a great addition to your Nerf war arsenal, but you can also use it to finish off your Chewbacca cosplay costume!