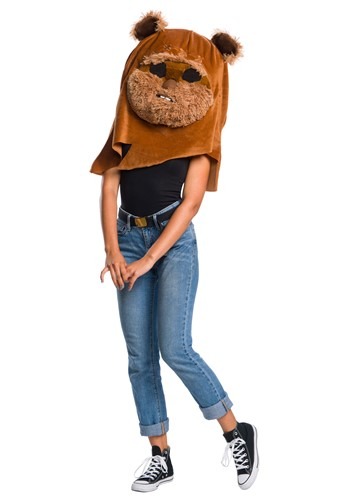 Wicket started off a pretty simple-minded Ewok. He liked spears and primititve tools. Very much a fan of the jungle kind of living and would have loved to never have interacted with a droid ever. (Really, most of us can probably relate to that a little bit.) But, those Ewoks have really walked right into the modern world. Quick to learn and even faster to take down the baddies, they are surprisingly skillful despite their simple beginnings.

Well, it's been a long time since those wars that took place far, far away. We think maybe it is time to check up on our Ewok friends and see exactly how far they've come! Turns out that they know exactly what they are doing and have definitely turned today's technology to their advantage.

See what we mean when you get your hands on this Oversized Ewok Plush Head. This officially licensed headpiece turns you into an Ewok pal thanks to the foam and fiber constructed head and the long drape that falls over your shoulders. Mesh eyes keep you seeing clearly (or at least as clear as Ewoks would with fur in their eyes) while the look is simply adorable.

You won't need to dive into Hyperspace just to get your Ewok on thanks to the Cyberspace skills that these Ewoks have developed. Enjoy some fun in the fur with this Ewok Head and get to your next adventure!