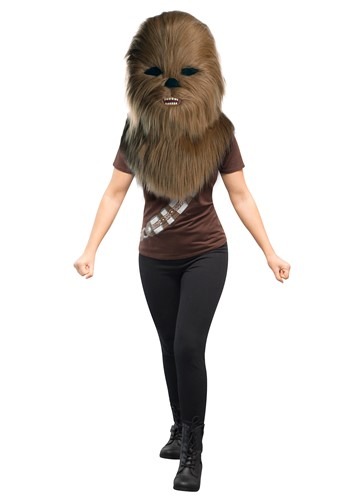 Chewbacca is an interesting Wookie. He is usually pretty quiet. He definitely gives off that gentle-giant vibe. Only when he talks does everyone stop and remember they have a considerable powerhouse on their team. Every person in the squad has their roles to play, especially when you are a part of a crew. People forget that Chewbacca is a great pilot outside of being the muscle. If you are a fan of the furry OG from Kashyyyk or require some officially licensed Star Wars merch, you will bust a bowcaster for our Adult Star Wars Oversized Chewbacca Mascot Head!

Chewbacca cosplay will never be the same. Check out this Wookie plush head; it looks like we took it right off the first Star Wars movie set. This oversized Chewbacca head is composed of polyurethane foam, polyesters fibers, and faux hair, so no Wookies were hurt in the making of this costume. There are even mesh eye holes, which are very nice when you have to maneuver a spacecraft. If you are a fan of Chewbacca or Star Wars, this Wookie head is a must-have!