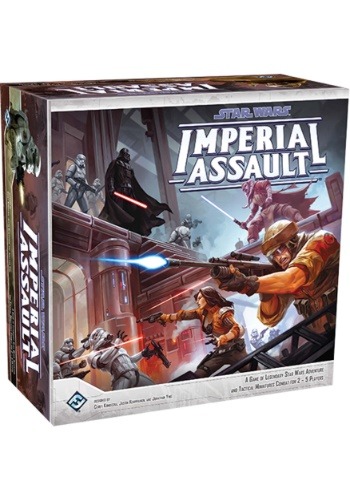 They think they have the upper hand. They may have destroyed the Death Star, but their victory will be short-lived. You’ll crush the Rebel Alliance in one smooth motion. You’ll silence Luke Skywalker and bring order back to the Empire. After all, it’s your job as the commander of the Imperial Forces!

This Star Wars: Imperial Assault Board Game recreates deadly battles between the Rebel Alliance and the Galactic Empire. You can choose to command the nearly unstoppable forces of the Empire or stand on the side of the ragtag group of rebels looking to liberate the galaxy from the Empires crushing grip. Who will win? You have to play to find out.

This in-depth board game comes with everything you need to start playing. It comes with 34 detailed figures, including Stormtroopers, Rebel Soldiers, strange creatures, and Imperial vehicles.  It also comes with an assortment of dice, hero sheets, tokens, and cards required to play the game. The game board comes in the form of map tiles, which can be assembled in a nearly limitless number of ways to create unique battle maps for each campaign. It also comes with instructions, which help you play the different game modes, which include sprawling campaigns and short skirmishes. This game is designed for ages 14 and older and plays 2 to 5 players. It does take around 1 to 2 hours to play each game, so make sure you have a chunk of time set aside to finish your battle!