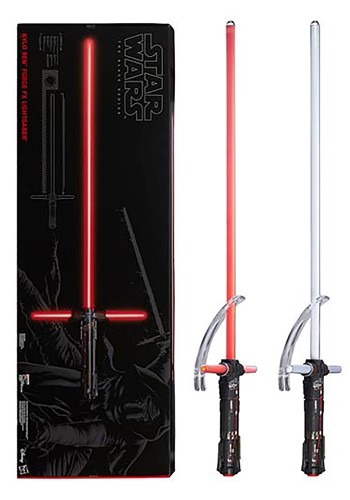 Information
Includes & Highlights
Item #EEDHSB3925
Items Included
Product Highlights
Size Chart
Product Description
Obi-Wan said the lightsaber was an elegant weapon for a more civilized age. Obviously he never met Kylo Ren and his lightsaber. That thing is brutal. Not only does it have the menacing red that most Sith Lords choose for their lightsaber, but it also has a highly volatile and unstable looking blade that makes it look like the thing of Yoda's nightmares. And have you seen that hilt? It looks like he pieced that thing together from parts of a chainsaw. It's definitely not the kind of weapon that Obi-Wan was talking about in the original Star Wars movie, which is kind of why we like it.

Of course, if you want your own version of the villain's deadly weapon, then look no further than this Star Wars Kylo Ren Force FX Lightsaber. This deluxe model collectible recreates Kylo's weapon from The Force Awakens and it comes with light-up action and sounds from the movie. Now, you can finally feel like a master of the Dark Side just like he is. (Just don't go around poking family members with it since that never ends well).