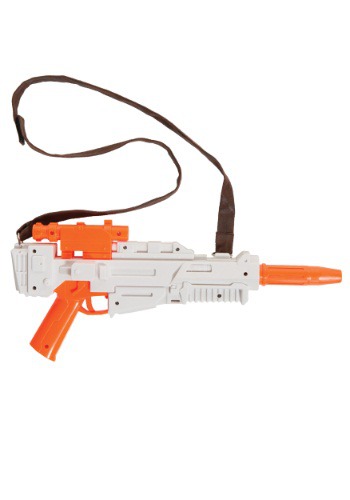 There was some long debate when some of the most recent developments of a galaxy far, far away came into the office.  When we learned about Finn leaving the stormtroopers and setting out to bring about a real change in the world, the first thing that we wanted to know was whether or not he would be able to hit anything.  Just think!  If Stormtrooper Finn had the same hit-per-shot percentage as your average Stormtrooper, but Rebel Finn suddenly could… you know… hit things… why, it would change everything!

Of course, the more we looked into it, we realized that it might also be the fact that Finn has a pretty rocking personal blaster.  So, whether you’re going to be a stormtrooper, a rebel fighter, or certainly if you are Finn, himself, you know that you need to be wielding this officially licensed and brilliantly realistic Star Wars Ep. 7 Finn Blaster Accessory.  Fastened with the mysterious power of Hook and Loop fastener (a near relative of the Force) on an attached shoulder strap, this blaster will make the perfect completion to any quest you might be on.  (And, really, we’re just curious what happens if a Stormtrooper uses it, too!)