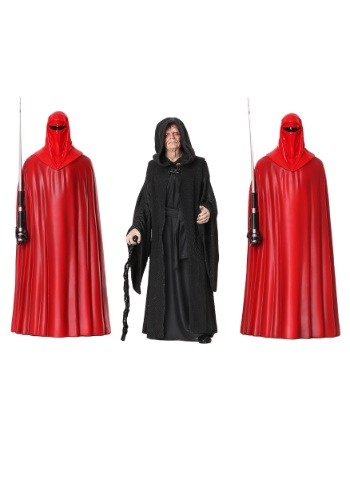 Let's face it. There's no use collecting a whole host of awesome Star Wars figurines if there aren't some bad guys mixed in. Think about it. When you pull out your figures to do battle you'll have all of these awesome Jedi warriors and good-hearted ruffians fighting... fighting what exactly? The carpet? Heavens no. You need some evil bad guys for your other figures to do battle with. Enter these Star Wars Emperor Palpatine Royal Guard 3 Pack statues. Made by ArtFX+, this 7-inch PVC figurine set includes Emperor Palpatine and two of the Emperor's Royal Guard all decked-out in red. They're exactly the bad guys you're looking for.