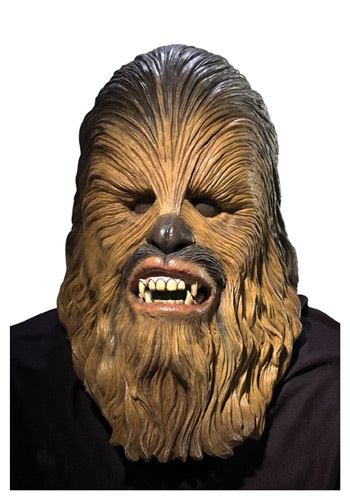 No one can topple the seemingly unbeatable force that is the Empire all their own.  Even if you’re a captain that manages to fly asteroid laden space routes that only the most careful of smugglers risk entering, even if you can make the Kessel Run in a shorter (much more dangerous) distance than anyone else, you’d be crazy to try to take on a mission against the Empire without a solid ally at your right side.  Fortunately for all of us, Hans Solo chose very well in his alliance with the mighty Wookie warrior, Chewbacca.

Despite the fact that we all love our Wookie buddy, it’s hard to handle the fact that none of us actually understand what the guy is saying!?  Nice that Hans translates (usually), but the only way to really understand what sorts of threats these two had to undergo in order to bring about even a hope for peace, you have to get inside the mind of the Wookie, himself.  And, the best way to do that is to get in his head literally… with this officially licensed Star Wars Deluxe Latex Chewbacca Mask, for example!  Get every bit of the real Chewie, right down to the texture of that furry face and practice your Wookie call!