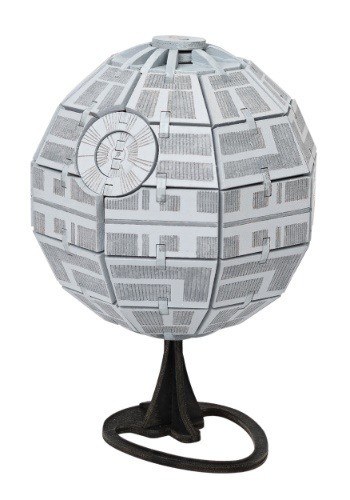 Generating Fear at Any Size

A fully-operating, globe-like space station armed with a super taser struck fear into the hearts of the Rebel Alliance. The Death Star's presence gave the rebels the choice of either surrounding to the Empire or taking every measure imaginable to destroy it. They chose to attack. Now to create with your own hands a personal reminder to never give up and persist in your own struggle, build this model and set it into orbit in your own space, like your bedroom or your living room!

As part of the experience to build your own Death Star, a softcover, an information-packed booklet shares the Death Star’s history, power, and fate. Then there’s work to be done. This wooden model is a do-it-yourself project. Customize it as you see fit. In the end, paint it, and ready it for display.

The Power of an Imagination Unleashed

No greater weapon in the Star Wars universe delivers more proof of the true power of The Force than the attack on the Death Star. Go forth and know the force is with you as someone who holds the Death Star’s fate in his or her hands.