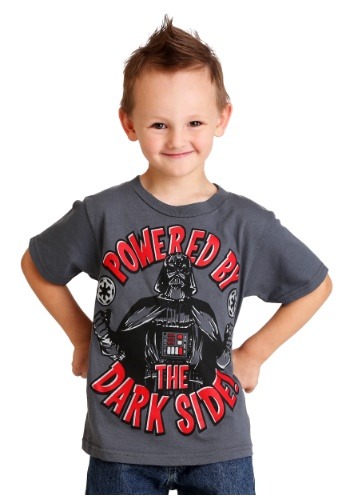 Darth Vader Powered By the Dark Side T-Shirt for Boys

In your universe, where battles between good and evil play out every day, boys are infused with the Dark Side of the Force. You see it, and wonder out loud: "Where did all of that power come from?" It seems that these boys are official duplicates of Darth Vader himself.

For example, they might demand morning toast and push aside their milk and cereal bowls. Then it rains. Maybe you tell these little Darth Vaders in training to not go outside without hats and raincoats. In moments you look out, and they are running in circles outside and getting full of rain because of no hats or coats.

So, if you can't beat the dark side of the force underneath your roof, call out the obvious and award the ones with the Dark Side of the Force so much in them with this 100 percent, crew neck t-shirt. It's officially licensed from Star Wars The underlying message, of course, is that the Good Side of the Force loves them.

Boys will be boys. But once they find inspiration in Darth Vader, their mischief soars to unimaginable heights. So, get them this t-shirt and buckle up.