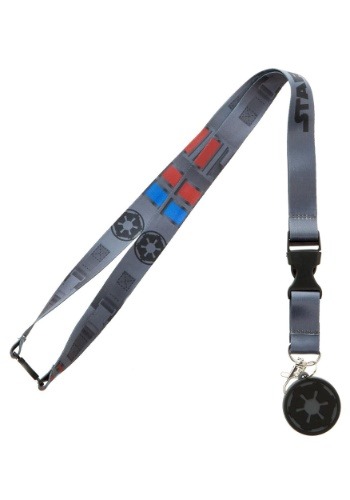 Think about it. The Death Star has regular employees. Someone has to repair those automated doors when they break. Someone has to cook dinner for all the Stormtroopers in the space station. And some poor soul has to manage the garbage chute with the wretched garbage beast living in it. Now, let us ask you this. How do you think those employees get through the doors? Is there a special security clearance? Do they have to carry around ID badges? Does the Death Star janitor have a set of master keys on him at all times? If he does, he probably carries them on a lanyard like this licensed Star Wars one!

The Star Wars Darth Vader lanyard makes you feel like you have security clearance for the Death Star. How? Well, it has symbols of the Galactic Empire on the ribbon fabric, along with a matching Empire themed charm that dangles from the bottom. It also has small stylistic touches that make it look like Darth Vader's chest plate (maybe Darth Vader wears one of these underneath his suit). They lanyard also comes with a handy little card sleeve, so you can place your own ID badge inside of it.

Just strap this around your neck and you'll be ready to access all of the secret rooms inside of the Empire's most deadly space station! Just make sure that you reserve an escape pod before you head to work at the Death Star.