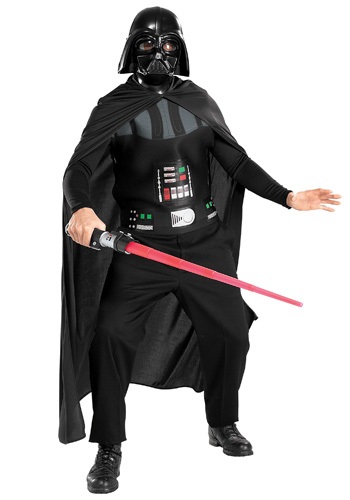 Rule the galaxy! It's really quite easy to do. At least when you get into the swing of things. And there's one dude who knows how to rule above all others. Of course, he does it by using the dark side of the force. Some folks aren't a fan of that. But others think it's the way to be!

We are, of course, talking about none other than Darth Vader. The ultimate villain of Star Wars, he was a pretty big time baddie through the original trilogy, and even though there's a new cast of villains trying to ruin the galaxy in this new era of Star Wars, for us, it's just all about the original Darth. Darth Vader!

If you're looking to tap into this Sith Lord for Halloween, you could get an ultimate replica Darth Vader costume. But for our dollar, why mess with all that expense and wear the clunky armor when your sights are set on fun. If your sights are set on ruling The Empire, that probably would be the way to go, but for party time, this Star Wars Darth Vader costume is just perfect!

With all the essential gear to mimic Lord Vader's high tech suit, this easy-to-wear costume will transform you into the iconic Sith Lord with ease. The foam chestpiece has all the printed suit details, and the cape secures around the neck. Just wear your own black pants and shirt, pop on the PVC mask, and you'll be ready to do your first choke hold! Practice that, and have plenty of fun at your party. If all goes well, build off that success and start practicing to rule the galaxy!