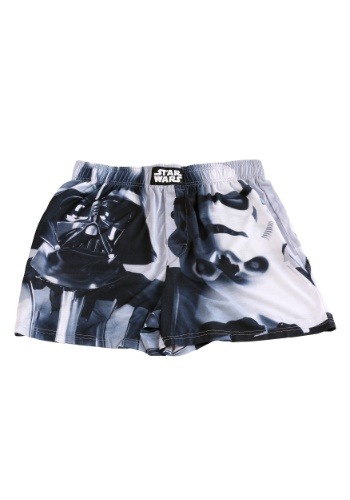 Mugs Only a Mother Could Love (even the Clone!)

A man's belt, looped through many belt loops, was invented for a purpose. That is, to prevent a pair of pants from falling down and revealing the type and style of a man's undergarments underneath. What a man wears for underwear while on the run or at work says a lot about his personality and fascinations.

For instance, consider a HUGE Star War fan who believes that the Force is within him. But it is the dark side of the Force that he enjoys for his musings. Not the route by which to gain popularity. Our solution is to keep things under wraps . . . and under the belt.

It's best to keep things private, and the best place to do so is found in these Darth Vader/Stormtrooper boxers. The shorts, with elastic waistband, feature the mug faces of two of your favorite dark-side characters.

We would like to offer our lightsaber swoosh of a genius idea: Keep your dark-side admirations under wraps. Before you buckle up your pants, pull up these boxer shorts, and go about your day with a big secret-keeping smile.