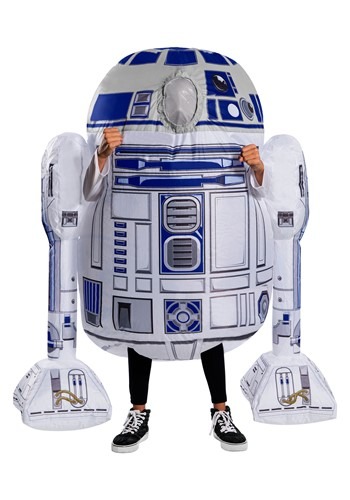 The Droid You're Looking For

It isn't often, but sometimes the fate of the Force depends on finding the single most important Droid in the galaxy. Perhaps they are hiding a blueprint that will offer up the Resistance the only path to stop the Empire. Maybe they're the only creature out there who will have the quick wits to unlock the door when you're stuck in what accounts for an Imperial bathroom, overflowing in trash. And, sometimes, they're going to have exactly the kind of smile that you need to truly make your day.

More often than not, you'll find that the latter case is the more common one! That's why we are here to make sure that you'll always hear the bleeps and bloops of your favorite Star Wars character combined with your very favorite humans in all of your galaxy... and all with the flip of a little switch!

Boot up the fun in the most memorable way when you gear up your kiddo in this officially licensed Star Wars Inflatable R2D2 costume for kids. This jumpsuit fits and fastens easily with a long-sleeved shirt and a zipper up the back. A battery pack located in the back left turns on to activate the fan that will help the R2D2 tunic billow into shape. Your tyke will see through a mesh cover in the hood, giving your kiddo the illusion of truly joining the Star Wars crew.

Nobody really understands the Droid language, we have to think. But we suspect that your brilliant kiddo will manage to prove that they've got everything they need to save us all. (Maybe even Alderaan, since they'll be starting their Droid heroics early.) Suit your little one up in this little R2D2 Inflatable costume and let them whoosh your way to fun.