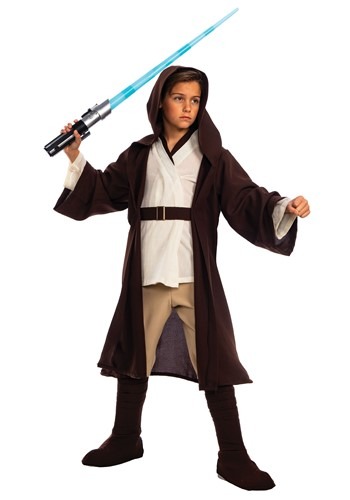 These Aren't the Droids You're Looking For

That weird old hermit living in a Tatooine cave is more than he appears. The local moisture farmers might scoff at the idea, but they'd be awed and a little scared to learn that this guy has been an ambassador to foreign planets, battled and defeated a Sith lord, saved several innocent people from the wrath of the Dark Side, and is still one of the most powerful Jedi knights who ever lived. He can convince you that this isn't the candy you're looking for. It's actually his candy. But he probably wouldn't do that because he's too noble. Unless he really needed the sugar!

Step into the shoes - or in this case, the boots - of a true hero! This officially licensed Star Wars Obi Wan Kenobi Costume for Boys will make you look just like the famous Jedi. The white undershirt, lightweight for desert planet living, fastens in the front and looks just right when belted with the wide adjustable belt. The brown tunic slips on over the top and has a hood to conceal your features when you're slipping past droid guards or sneaking onto the Death Star. The boot covers conceal your everyday footwear. The only thing left to do is to grab your blue lightsaber!

Are you the younger Obi-Wan who fights beside Qui Gon Jinn or are you the wise master who teaches Luke to channel his power? Whichever it is, the Rebellion is relying on you