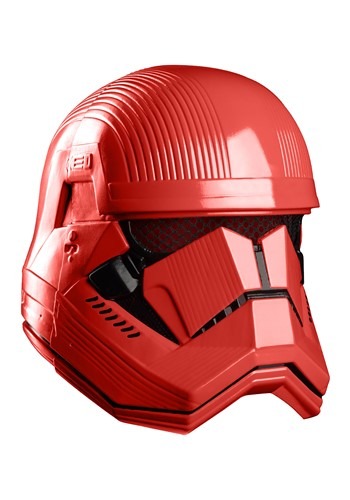 Knights of the New Empire

The Sith Trooper. We've heard those words before, though it was a long time ago. Perhaps you have heard some of the stories of Darth Revan and the power that he held. Now, now. You might be rolling your eyes and calling out the sins of the Star Wars extended universe. We don't blame you for some of that. (Looking at you, Holiday Special!)

But, with the Sith Trooper reappearing in Rise of the Skywalker, we have to wonder just how much of the past is coming back to haunt us. Not only are these updated Stormtroopers working directly and openly for the Sith, possessing combat skills that have haunted us since video game days, but they've got quite the shiny upgrade in look, too!

Know the enemy by becoming the enemy when you wear this officially licensed Sith Trooper Mask. This is a two-piece mask of molded plastic, shaped to look just like the Sith Troopers from the 9th Star Wars film. It fastens with hook and loops and provides the intimidating and retooled look of the classic Stormtrooper gone red!

There's something about the image of a red lightsaber gleaming in the dark that has us quaking. But, when you peer through the red gleam of this Sith Trooper mask, folks will be asking, "Darth, who?"