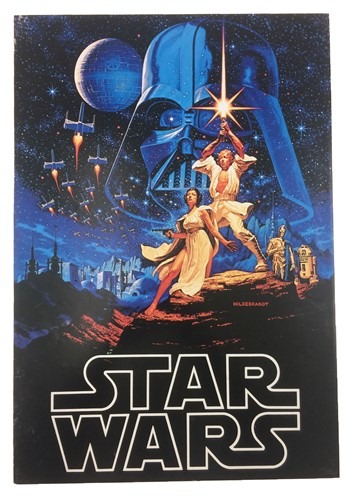 This IS The Decor You're Looking For

Luke Skywalker and Princess Leia, clad in flowing white, feature in this Star Wars A New Hope Wall Decor, which is a 13x19-inch box art version of an original film poster from Star Wars Episode 4. It's an iconic image from a film that took the world by storm. Beloved duo R2D2 and C3PO loom just behind Luke as he holds a lightsaber high overhead, and Darth Vader's foreboding visage (and his nefarious Death Star) looms behind the rebel heroes in the vast star-dotted blackness of space. The image is romantic and nostalgic, and it's certain that anyone who has seen this film can imagine the rolling credits and the booming Star Wars theme as they glance upon this piece of art (which would go perfectly on your wall, or the wall of any Star Wars fan, don't you think?).