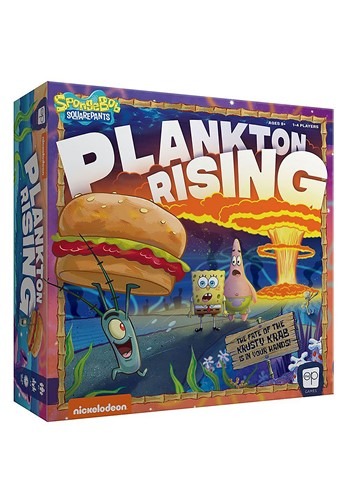 Down the Chum Bucket!

One would think that a delightful life in a pineapple at the bottom of the sea would be all fun and games. And, it would be, too, without the constant efforts of a certain megalomaniac. Plankton has yet another plot to steal away the secret recipe of the Krabby Patty on his way to total oceanic domination. Fortunately, SpongeBob and the rest of his friends are ready to defend the sea from the weirdo villain's nefarious naughtiness!

Join 2-4 excellent friends and family in an officially licensed game that brings you into the world of SpongeBob SquarePants. The Plankton Rising board game brings your team of animated characters to conquer Plankton as he stands upon his Chum Bucket throne. Each player controls a team that stars one of the show's classic characters, each possessing unique powers. Every round of play, a player will gather their die pool in an effort to either recruit more sea-dwelling allies or fight off one of Plankton's goons. Be careful, though, because Plankton gets a turn, too! He'll use his turns to try to gather the recipe components and get even more powerful. Everyone loses the game if Plankton completes the recipe or knocks out too many SpongeBob characters. Stop Plankton and earn yourself a well-deserved snack (and maybe even a driver's license).

Who Owns the Ocean?

The tiny villain, Plankton, might have some huge ambitions. But, when you and your friends unite in Spongebob Squarepants: Plankton Rising, you'll be able to end his wicked goals!