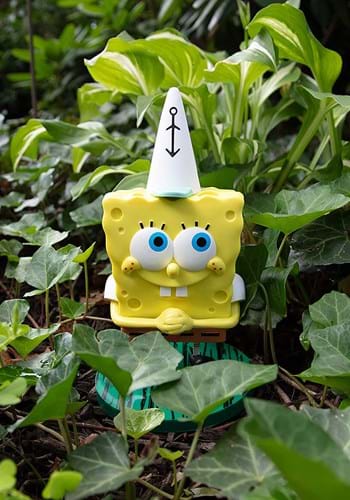 What’s that in your garden? Wow! I’ve heard of those creatures, but I thought they only lived in pineapples under the sea. I guess that they also like to see what’s happening on dry land every so often. Sandy Cheeks must have told him that we have crab cakes above the ocean too. Let’s make him welcome so that he’ll stick around! He’d probably like a nice shady spot by your flower bed, in your rock garden, or among your tomatoes. If he gets into mischief, you could always put him on your desk! It might not keep him from getting into trouble, but watching his antics will be a pick-me-up for your workday.

If nautical nonsense be something you wish, look no further than this officially licensed Spongebob Garden Gnome! Dressed in his trademark captain’s hat, sailor shirt, and shorts, everyone’s favorite sponge makes the perfect figurine. “Life-size” at around eight inches tall, he comes with a stake so that you can secure him to the turf (until he gets loose to pull a prank on Patrick, that is!)