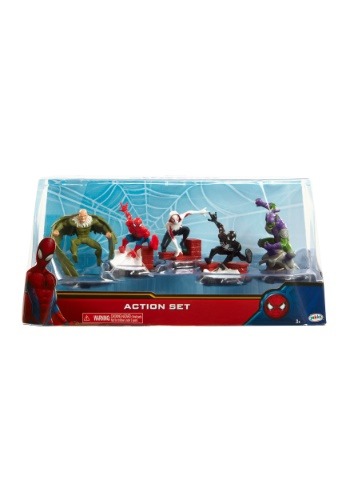 Spider-Man has always had some of the best action scenes in all of Marvel comics and even the Marvel films. He can do so much, from swinging, to fighting, to doing science stuff, to just being a kid... Spider-Man is by far the best at getting things done! He also just happens to have all the best villains. He's got Green Goblin, Venom, Vulture, Doc Ock, and the list goes on and on. There's no wonder that Spidey can inspire so many comics, and movies, and now awesome toys and action figures. It's easy to see how his superhero adventures inspire so many kids to imagine all their own Spider-Man stories and play them out with toys just like the ones in this officially-licensed set.

This Marvel Spider-Man set includes five characters: The Vulture, Spider-Man, Spider-Gwen, Symbiote Spider-Man, and Green Goblin. The miniature figures all have a dynamic pose, and their small size makes them perfect for playing with during car rides or in the backyard. If you're little one just can't get enough of the Friendly Neighborhood Spider-Man, then they're going to love coming up with epic stories of good versus evil with these spectacular figures.