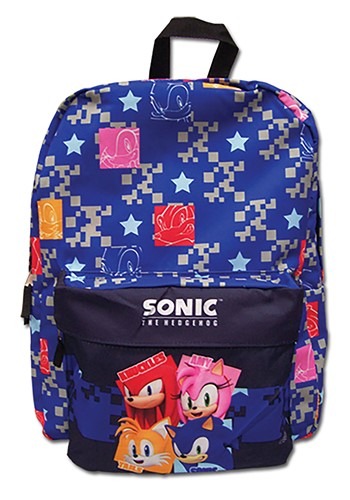 Once upon a time, when Sonic first realized how fast he could run, nothing could stop him from blasting through school at supersonic speeds. But since he was a rookie at the whole fastest-thing-on-the-planet business, he didn’t realize that being really, really speedy sometimes made it hard to hold onto things. His hat blew off his head. His pencils and notebook paper flew out of his pockets (yes, Sonic has pockets. Don’t ask us where. We don’t know.) He decided that what he needed was a great bag to keep his possessions safe while he whizzed around the world!

It’s time to speed up with this Sonic the Hedgehog Pattern Book Bag! The officially licensed canvas construction has length-adjustable shoulder straps to keep it snug against you when you’re racing down the sidewalk. It’s covered with cool Sonic the Hedgehog graphics, including images of Sonic and his friends Amy, Tails, and Knuckles.