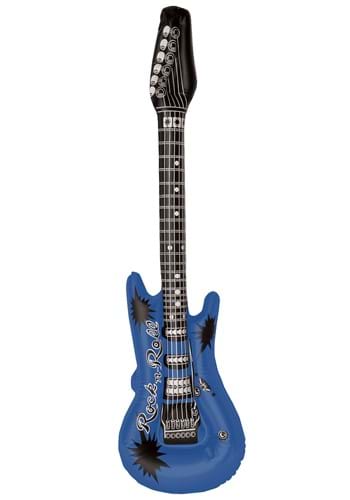 We're not sure if you knew this: but there are Air Guitar competitions out there. That's right. There are. Go on, go look them up. We'll wait here.

Now, aren't you impressed? That people can compete with such flair and ferocity with an instrument that isn't even there? We know we were impressed the first time we saw such things. How does one even get to such levels of muscle precision without an actual instrument? Crazy. We're pretty sure we know how they did it though. They must have started with a real guitar. Something with a weight that their hands learned how to play.

And then, they must have graduated to something of the same shape, but something as light as air. Something like this Inflatable Toy Guitar. This 42-inch long inflatable guitar has a helpful "Rock-n-Roll" reminder printed on the front.

And then, only after these master performers had practiced their gestures with such a delightfully weightless form, would they have been able to try true air-guitaring. Of course, not all performers will make it to such levels of skill, but that's alright. Not all of us were made for the stage. But we're fine with that as long as the rock-n-roll lives on.