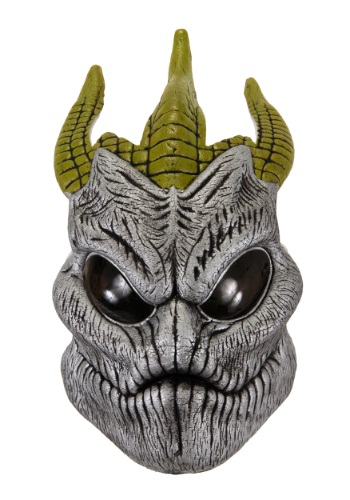 Want to get in touch with your lizard brain this Halloween? Well, if you're channeling the Silurian race from Doctor Who then that lizard brain of yours is going to be super smart. The Silurians have been enemies of the human race in Doctor Who history but they also can be reasoned with. Anyone who's ever gotten to know the Victorian detective, Vastra, has a soft spot for this ancient race.

The Silurians date from way before humankind. They went dormant when they saw the moon come into orbit, assuming that a round, planet-like shape coming toward them must be bad news. We don't blame them. Anyway, they went underground only to wake up when humans started digging tunnels for subway systems. Vastra was friendly, bonding with people as she passed as a mutated human. Other Silurians are a bit more peeved that warm-blooded humans have taken their earth. You can tell who's angry by checking out their armor. This mask has the green tentacles that make up this breed's corona, the rest of its face is decked out in Silurian soldier garb. Whether you're a good lizard person or a bad lizard person, this Halloween it pays to be green!