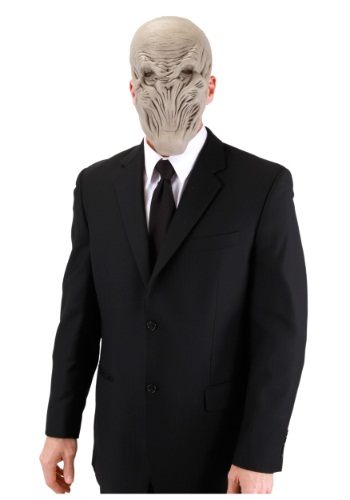 It's one thing to be overtly creepy. It's another thing to take that creepiness and weirdly edit yourself out of the minds of your victims. That’s what the Silence does. Are they a species? Are they a twisted, ancient religious order? It's hard to say. We've never seen religion make anyone's face look like a melted candle but you never know when you're part of Doctor Who's story.

Whatever they are, these beings have been around since humans invented the wheel and fire. We simply don't remember them because as soon as we look away we forget they were there, no matter what they just did. You know that sensation you get when you can't help but think that you've forgotten something? You could have just run into one of their kind! Mull on that for a while.

The next time you run into one of these creatures, your safest bet is to have one of these masks in your back pocket. It has eye holes just above the grotesque squid-like nose and the bald forehead will cover your hairline, a clear elastic band keeping it in place. With a mask like this, you'll have a Halloween costume that no one can forget.