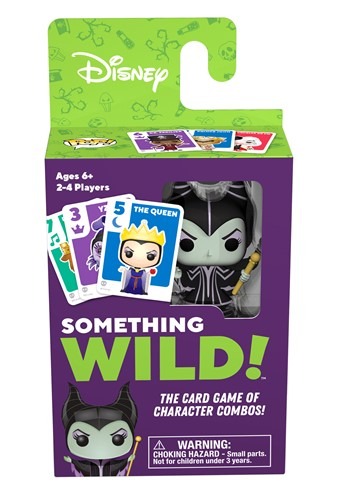 We're pretty sure that everyone in the Disney world has learned of the disasters that come from not inviting Maleficent to a shindig, but that doesn't mean that the Mistress of Evil is just hanging around in her castle waiting for the mail. After realizing that the party games played by those of the kingdom were really rather boring, she started putting together her own magical nights and inviting her own favorite guests! It turns out that you're a fortunate soul that gets to join in the fun because now is the time for Something Wild!

Join Maleficent for a few rounds of something magical, namely this Funko Signature Game, Something Wild: Disney Villains Edition! If you've played Rummy, you're going to be a wizard at this game! Just bring 2-4 players to the table begin! Your goal is to acquire three Power Cards, gained by having a matching set of Disney villains or making a matching run of three consecutive cards (each featuring cute Pop! style artwork). If you're truly skilled, you will gain control of the Maleficent Pop! Pocket Figure and empower your hand with any of the matching Power Cards you've obtained.

No Time to Rest

The job of a host is never complete but if you want to make your Something Wild party even better, combine your deck with other editions. You will have more characters to run around with, not to mention additional Pop! Pocket Figures that will offer you additional powers at the table!