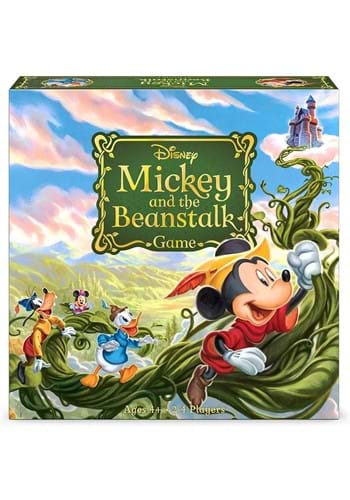 Signature Board Games: Mickey and The Beanstalk Game

Straight from the Giant's Pantry!

Sometimes the kingdom is in just a bit of a struggle. Those garden veggies aren't getting quite enough sun and the family cow simply isn't able to offer up the milk like she used to. What is the village going to do!? It turns out that those beans didn't turn into the harvest that anyone was expecting, either... but that doesn't mean that there isn't a grand opportunity. All the town needs is for a few brave buddies to climb atop the vines and see what treasures they can bring home. It's time to gather up your crew and see who will be hailed the hero!

Dive into all the Disney fun when 2-4 players join in 30 minutes of fun with this officially licensed Signature Board Games: Mickey and the Beanstalk game. The game includes multiple game mats, character figures for Mickey, Minnie, Donald, and Goofy, and a colorful spinner. Construct the 3D board including the giant's home, beanstalk, and farmlands. On each turn, try to gather food from the pantry or the magical golden harp from the locked box. Whoever brings the most food back to the village becomes the talk of the town.