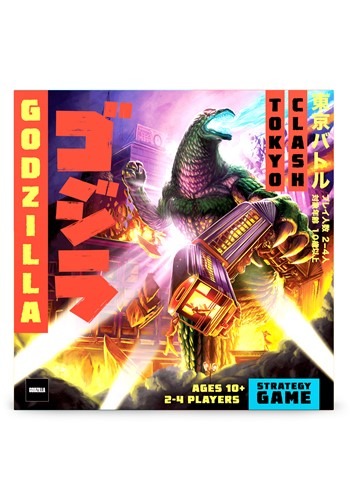 Get Your Kaiju On

The epic Japanese monster movies have grabbed our attention for years. We love Mothra, King Ghidorah, and who wouldn't love a creature with a name like Megalon? But, of all of them, the true king of monsters is Godzilla! What happens when the collection gets together? (Well, other than some serious collateral damage in Tokyo?) If only there was a way to predict where the destruction would land so we mere humans can stay out of the radius of danger!

Gather 2-4 players together and transform into your favorite Kaiju when you play Godzilla: Tokyo Clash, one of Funko's Signature Games! Construct a city made of 3D models and play cards to determine your monster's actions. Will you chuck a train at Mothra or does Ghidorah deserve an energy attack that will drain their cards for next turn!? Crush through the cityscape to gain more energy and boost your Kaiju powers! Only one monster can be standing at the end of the clash in this game that changes every time!

The Most Powerful Monster

Just because Godzilla is the most famous Kaiju (and Tokyo Clash is named after him) doesn't mean he's assured a victory. It'll take creative tactics to claim the win in this Signature Game!