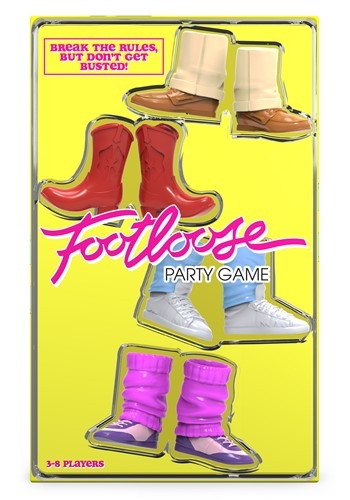 Rebellion Can Be Fun

Remember when you were a kid in Bomont? Those years when you were challenged by the whole town and taught that any form of dancing would lead to doom, pain, and... who knows... the city catching on fire? We're not really sure what the heck those fuddyduddies were worried about. Was it an epic solo dance routine to the sounds of music that could get anyone's heels kicking up? Heck, maybe you can hear those tunes starting up right now! If that's the case, we've got a little something to help you get through your night.

Transform into rebellious teenagers with some serious dancing talent when you gather 3-8 players for a few rounds of the Footloose Party Game! Live out your favorite movies from the film when you gamble at a game of chicken with tractors or tactically break game rules (without getting caught) while you show your stuff at the secret prom. Each game plays in about 15 minutes (and even features adorable finger shoes), so you'll dance through round after round with ease.

Kick Off Those Shoes

The best part of a good party game is that footwear generally isn't required! So, start up the peppy songs and wiggle those toes to this Signature Game from Funko!