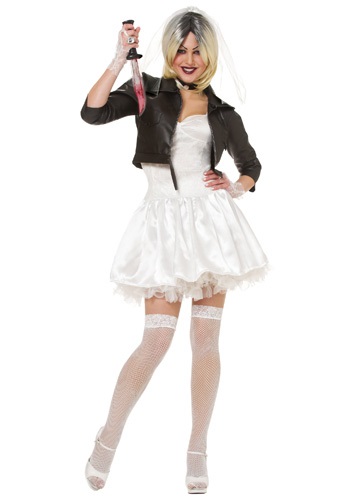 What's a girl to do, eh? A guy you like gives you a diamond ring. That mean's you're engaged... doesn't it? Well, we would've thought so too, so we really can't blame poor Tiffany. Charles Lee Ray gave that girl a ring! Who cares if he's a psychotic killer? She's a bit out-there herself. They're a match made in crazy-town! Meant to be! That is, they were meant to be until Charles died, possessed a doll, and Tiffany couldn't find him for a decade. But now they're reunited! Even if Chucky is a small, plastic, red-haired freak with stitches and staples, at least Tiffany has the soul of her betrothed back. They can still be together forever!

Well, at least that was the plan. Long story short, apparently the ring wasn't an engagement ring and Tiffany and Chucky weren't engaged. But it's ok! It's all better now because Chucky murdered Tiffany and made her into a doll just like him! Now those two crazy lovebirds can be together until death do them part.

Of course, being the bride of Chucky isn't all guns and smokes. A girl has got to look the part. We're not talking flowers and frills here, no, if you want to be like Tiffany, you gotta look like a lean, mean, killing machine (that's what Chucky likes). Tiffany would wear something like this Sexy Bride of Chucky Costume. It has a short white wedding gown with white veil and white lace gloves. Top that with a jet black jacket with faux pockets and buckle, and a mean black choker, and everyone will know you're not one to be messed with.

A Nice Day for a White Wedding

As a matter of fact, once you get into these mean threads, we wouldn't be surprised if your psycho sweetheart proposed on the spot! You know, if you're into that sort of thing.