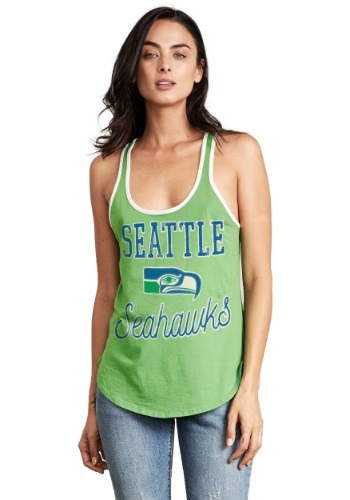 Now, we don't want to cause any controversy but we're pretty sure that the Seahawks have one of the coolest logos ever. Just look at that blue, white, and green head. It's designed after a local tribe's mask, which gives it a timeless look. There are other reasons that make Seattle's team cooled than average as well. For instance, there's the fact that Seahawks fans are the absolute loudest fans in the USA! They are so intense that their cheering caused seismic activity that their cheers ranked between one and three on seismic sensors that were a hundred yards away from the stadium.

If you want your enthusiasm to rank with the rest of the Seahawks fans then you'll need some Seahawks gear in your wardrobe. This tank top is peppy enough for gameday and cute enough for everyday! You no longer to be the loudest person in the room to communicate your Seahawks love. Simply don this tank and everyone will know that you're part of the powerful twelfth man!