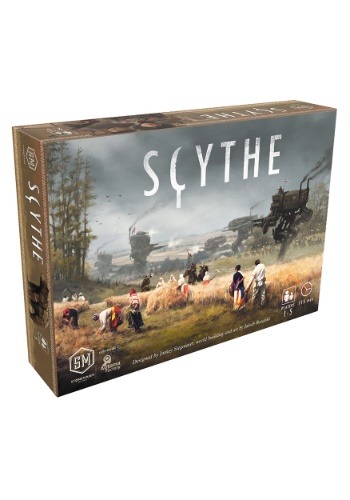 You Had Us at Giant Battle Mechs

Scythe is a unique game where you take control of a country from the 1920s. There’s just one catch. This version of the 1920s comes from an alternate timeline, where they had battle mechs. Why? We’re not sure, but we think it has something to do with Nikola Tesla. It’s best if you don’t ask too many questions about that little bit!

In the game, you must command your workers to gather resources, build battle mechs to defend your nation, and build popularity with the people. Of course, your enemies will be competing for the same resources, so you’ll have to keep on your toes or find yourself deep in the midst of a full-on battle. Make sure that you’ve amassed plenty of prestige and resources for your country by the end of the game, because you’ll need it to win!

The game comes with the core Scythe game, which includes rulebooks and quick reference guides to help you learn the game. The game is quite intense and it may take a playthrough to truly figure everything out. The gameboard is a beautiful foldout board a map of an alternate universe Europe. The game also comes with resource tokens, faction mats, power dials, player mats, cards, and highly detailed mech miniatures.

We recommend this for experienced board gamers, as the rules complexity do make it a bit difficult for first-time strategy gamers. But to those who enjoy a good challenge, you’ll be hard-pressed to find a better board game for game night.